Divorce by mutual consent in India - Divorce lawyers in India

In an appeal against the dismissal of a petition for divorce under s. 13 of the Act a compromise petition signed by the parties and their respective lawyers was filed praying for dissolution of marriage by mutual consent. It was held that s. 13B(2) of the Act is directory only. Section 13B(2) no doubt cautions the court of its duty to fight the last ditch battle to save the marriage, but when the court is fully satisfied on the basis of the proved facts that in the interests of justice of the society and the individuals marriage tie should be put as under immediately, s. 13B(2) does not impose any fetter on the powers of the court to grant decree of divorce. The time-table fixed by s. 13B(2) does not apply to an appellate court.

Where the ingredients necessary for a decree of mutual divorce under s. 13B are proved by the evidence of the parties, the court cannot refuse a decree for divorce. The ingredients are that they had been living separately for a period of more than one year and that they had not been able to live together and that they had mutually agreed that the marriage should be dissolved.19 Section 13B(l) does not envisage the recording of the statements of the parties at the time, of filing of the joint petition and merely because their statements were not so recorded, they could not have been denied the relief of divorce.20 There is a fourth ingredient for a decree of divorce by mutual consent, that i the consent of the parties has been obtained not by force, fraud or undue influence.-I A compromise decree can be recorded and divorce may be granted under Or. 22, r. , CPC provided the court is satisfied that a ground for divorce specified in the statute can be spelt out from the records.

The parties in a case2 had signed a memorandum of compromise stating that th~ husband would pay certain amount to the wife in two installments by Demand Dra and the decree for divorce by mutual consent would take effect after payment of ~ second installment. It has been held that the decree for dissolution of marriage solemnized between the parties has to be passed in terms of the memorandum of compromise filed in the court.
Divorce by mutual consent

(l) Subject to the provisions of this Act petition for dissolution of marriage by a decree of divorce may be presented :0 the district court by both the parties to a marriage together, whether such marriage was solemnized before or after the commencement of the Marriage Laws: (Amendment) Act, 1976, on the ground that they have been living separately for: a period of one year or more, that they have not been able to live together. that they have mutually agreed that the marriage should be dissolved.

(2) On the motion of both the parties made not earlier than six months after the date of the presentation of the petition referred to in sub-section (1) and not later than eighteen months after the said date, if the petition is not withdrawn in the meantime, the court shall, on being satisfied, after hearing the parties and after making such inquiry as it thinks fit, that a marriage has been solemnized and that the averments in the petition are true, pass a decree of divorce declaring the marriage to be dissolved with effect from the date of the decree.

Corresponding law. Sections 13A and 13B of the Act correspond to s 27A and 28 of the Special Marriage Act 1954, respectively

Sections 13A and 13B were inserted by the Marriage Laws (Amendment) Act 1976. Section 13A provides that under certain circumstances the court may, while dealing with a petition for divorce, have a discretion to grant a decree for judicial separation instead. Under s. 13B of the Act divorce by mutual consent has now received statutory blessing.

Scope of section 13A

Under s. 13A the court can grant a decree for judicial separation though the petitioner asked for a decree of divorce.9 This is an alternative relief as provided in s. 13A of the Act. Section 13A commences with the words "alternative relief in divorce proceedings" and provides power to the court in a petition for divorce, if it considers just so to do, taking into consideration the circumstances of the case, to pass a decree for judicial separation. It is only when the ground on which divorce is sought is made out, then the court in the circumstances of the case may grant judicial separation.

Scope of section 13B

In a petition under s. 13B of the Act the parties are not required to prove anything in addition to that laid down in the section itself.!! During pendency of appeal in divorce proceedings, the parties may agree to dissolve the marriage by mutual consent or compromise provided it is neither unlawful nor the result of collusion. It is now possible to dissolve a marriage by agreement between the parties although none of the grounds on which a marriage may be dissolved by a court is found to exist.!2 Even a petition by one party may be converted into a fresh petition for dissolution of marriage by mutual consent.13 Where a divorce is granted without following the procedure laid down in s. 13B of the Act, the order is invalid.

Parties merely agreed orally at the time of arguments that they had mutually agreed that their marriage should be dissolved by mutual consent. The petition filed under s. 13(1)(ia) and (ib) cannot be treated to have been filed under s. 13B and the decree for divorce by mutual consent cannot be passed in such a situation. Further it is also a mandatory provision under s. 23(1)(bb) of the Act to satisfy the court that consent has not been obtained by force, fraud or undue influence.

In Preeti Singh v Sandeep Singh the divorce between the parties was granted by mutual consent according to the directions of the Supreme Court. 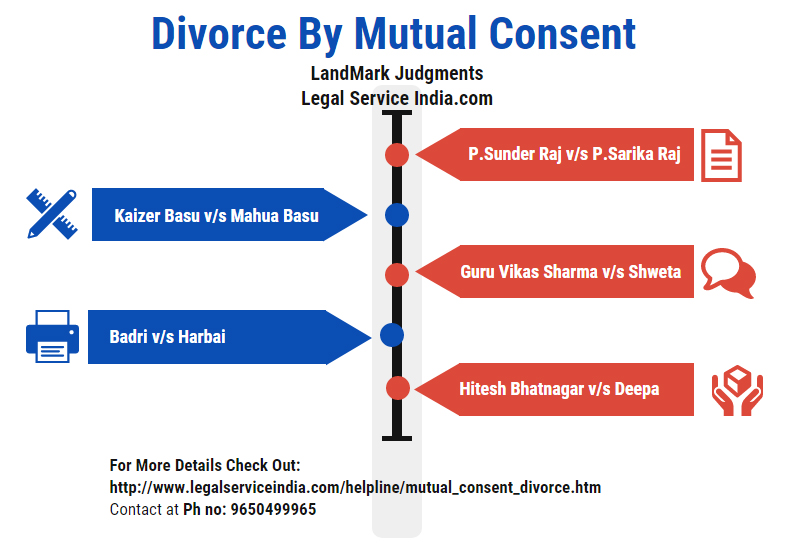