Remuneration for Labour and Minimum Wages

By Abhinavvv_m | Views 5299
On August 8, 2019, the Ministry of Law and Justice of the Government of India notified the Code on Wages, 2019 (the "Code"), which seeks to amend and consolidate the laws relating to wages and bonuses, as well as matters related to or customary to them, and incorporates the provisions of the Payment of Wages Act, 1936 ("Payment of Wages Act"), the Minimum Wages Act, 1948 ("Minimum Wages Act"), the Payment of Bonus Act, 1965 ("Payment of Bonus Act ("Equal Remuneration Act").

However unlike Payment of Wages Act, which applies to employees earning less than the statutory minimum wage, and the Minimum Wages Act, which applies to employees working in scheduled establishments, the Code envisions the provisions of timely payment of wages and minimum wages being applied uniformly to all employees, regardless of wage ceiling or sector.
Chapter II of the Code on Wages Act talks about Minimum Wages.

Section 6 says that appropriate government will set minimum wages. As per the Code  (i) basic pay, (ii) dearness allowance and (iii) retaining allowance have been included as components of wages.

Further, the Code excludes the following components from the definition of wages:

Employers exploited the notion of basic wage as a loophole to reduce EPF payments, hence contradicting the objective of the EPF Act. The Supreme Court addressed this issue in the case of The Regional Provident Fund Commissioner (II) West Bengal Versus Vivekananda Vidyamandir And Others[1], holding that all allowances that are universally, uniformly, necessarily, and ordinarily paid to all employees would form a part of the basic wage, which would be used for provident fund contribution.

When an allowance is shown to be either a variable, or was linked to any incentive for production resulting in a higher output, or the allowance in question is not paid across the board, or paid especially to those who take advantage of the opportunity, the allowance can be excluded from the basic wage.

Need Of Minimum Wage In India

Despite the large number of employees in the unorganised sector and their significant contribution to the national economy, they are among India's poorest citizens. As a result, it is critical that immediate action be done to ameliorate their situation. Minimum wages in India have a history of infrequent changes and insufficient cost-of-living increases. The minimum wage rates, which are set in a few states, are insufficient to cover even two meals a day, let alone the basic demands of health, education, and shelter.

Constitutionality Of Minimum Wage In India


Important Definitions In The Code


Procedure And Fixation Of Minimum Wages

Under Section 6 of the code, the appropriate government (central or state) shall fix a minimum rate of wages based on time work or piece work. While fixing the minimum wages, the governments may take into account factors such as, skill of workers, and difficulty of work. Also by Section 8 of the code, the minimum wages shall be revised and reviewed by the central or state governments at intervals of not more than five years.

The Government shall determine the minimum rates of wages payable to employees in the course of employment, according to Section 6 of the Code on Wages 2019. It directs the appropriate authority to fix the following, taking into account all relevant factors in the design of policies that are Minimum piece rate, Minimum time rate, Overtime rate, System of guaranteed time rates.

According to Section 7 the government may evaluate and amend the minimum wage rate which may consist of a basic salary rate and an allowance that will be adjusted at such intervals and in such a manner as the appropriate government may prescribe to correspond as closely as possible to the variation in the cost of living index number applicable to such workers a base pay with or without a cost-of-living allowance, and the monetary value of concessions in respect of deliveries of necessary commodities at concession prices, if such concessions are authorized.
[Section 8(1)(a)] First Method Committee Method

The competent government may appoint as many committees and subcommittees as it deems necessary to conduct investigations and advise it on any necessary fixes or revisions. The competent Government shall determine or adjust the minimum wage rates by announcement in the Official Gazette after considering the advice of the committee or committees. The wage rates will become effective on the date mentioned in the notification. If no date is stated, wage rates will take effect three months after the notification is issued.

In Edward Mills Co. v. State of Ajmer, it was determined that the chosen committee is just an advisory body, and that the government is not obligated to follow its recommendations. Section 9 of the Act stipulates that the Committee shall be composed of persons nominated by the appropriate Government to represent employers and employees in the scheduled employment, who shall be equal in number and independent persons not exceeding 1/3rd of its total membership. The appropriate government will choose one of these independent individuals as the Committee's Chairman.

When determining minimum wages under Section 8(1)(b), the appropriate Government shall publish its proposals in the Official Gazette by notification for the information of persons who are likely to be affected, and specify a date not less than 2 months from the date of notification on which the proposals will be considered.

The competent government will take into account the comments received. It will also contact the Advisory Board established under Section 7 before fixing or revising the minimum wage rates through announcement in the Official Gazette. The revised wage rates will be effective as of the date mentioned in the notification. If no date is indicated, the notification will take effect three months after it is sent. Revisions to minimum wage rates can be made retroactively.

The Code includes rules forbidding discrimination on the basis of gender I in pay by employers, (ii) in same job or work of a similar type done by workers, and (ii) in recruitment of employees for same work or work of a similar nature. Furthermore, the definition of payment under the Equal Remuneration Act was broad, including a basic wage or salary, as well as any extra emoluments provided in cash or kind to a person engaged in relation of employment or labour performed. The Code, on the other hand, specifies the components that shall form earnings for the purpose of equitable recompense regardless of gender, leaving minimal space for interpretation.[7]

Changes Bought By The Code For Wages

Analysis
The Code tries to harmonise the meaning of 'wages,' which is a step in the right direction. However, the Code's establishment of different definitions for 'worker' and 'employee,' as well as their usage, creates ambiguity. Furthermore, the Code aims to transform the notion of the 'Inspector Raj' in connection to the government's labour regulation by introducing inspectors-cum-facilitators rather than just inspectors.

In terms of offences and sanctions, the Code has ushered in a sea change. The punitive provisions show significant rationalisation and proportionality, with the goal of assisting rather than hindering economic action.

Conclusion
The goal of minimum wages is to safeguard workers from receiving inequitably low compensation. They contribute to ensuring that everyone receives a fair and equal share of the benefits of progress, as well as a minimum living wage for those who are working and in need of such protection. Minimum wages can also be part of a policy to combat poverty and eliminate inequality, particularly between men and women, by advocating the right to equal pay for equal work.

Minimum wages are described as the bare minimum of remuneration that an employer is compelled to pay wage earners for labour completed during a certain period, which cannot be reduced by collective bargaining or individual contracts. Its purpose is to protect workers against exploitation due to disproportionality of the payment to the amount and character of the work done. Minimum wages are a key element of any government's wage policy and generally operate to find a balance between socio-economic objectives and industrial growth.

In addition to the prevention of exploitation, a minimum wage policy should also aim to regularize employment and shift unorganized classes of the workforce into more formal modes of employment. The recently enacted Code on Wages replaced the Minimum Wages Act of 1948 and established a uniform, complete definition of 'wages,' which is divided into three sections: inclusions, specific exclusions, and conditions that limit the number of exclusions. 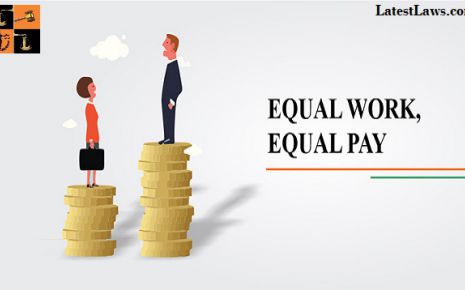 Laws On Health And Safety O...

Labour Rights And The Pande...

Mechanism Of Settlement Of ...