By | Views 7594
Juvenile delinquency is the term used to describe the criminal acts of the criminal offenders who are not major under 18. Delinquency rate in India is much higher among boys than among girls and it tends to be, the prime attribute for delinquency. The educational background of the delinquents along with the family background and their economic status which affects the juveniles or which results in the crime among juveniles.

The present scenario leads to the conclusion that the low income of the family, family background (nuclear or joint or homeless), lack of parental supervision on their children is the main cause which is leading to the rise in this trend of delinquency. Majority of the crime is committed by those who are in the age group of 16-18 years because of the negative influence of the peer groups or the surroundings.

Noxious surroundings, neglect of basic needs, bad company and other abuses and temptations would spoil the child and likely to turn him a delinquent. Juvenile delinquency has a very extensive meaning acts such as begging, drinking, gambling, pilfering etc which vicious persons very often commit are also included within the term juvenile delinquency.

Juvenile delinquency has become a global phenomenon in modern times. Despite intensive rehabilitative measures and special procedure for tackling the problem of juvenile, there is a growing tendency among youngster to be arrogant, violent and disobedient to law with the result there has been considerable rise in the incidence of juvenile delinquency.

As per the international norms, and also under the juvenile Justice System in India, a minor or a child cannot be tried in the same manner as an adult. A child is treated as doli incapax, with no mens rea- he/ she is not capable of understanding consequences of his/ her actions.

Keeping this logic in mind, children are dealt under juvenile justice system, and not under the adult criminal justice system. They can never be given imprisonment or death penalty.
However, juvenile delinquency has been increasing in capital city Delhi and other places in India at an alarming rate.

The involvement of the juveniles in serious offences like murder, attempt to murder, kidnapping and abduction has raised concerns in the nation. After the December 2012 Gang rape in Delhi (or Nirbhaya case, as it was commonly called), many debates and discussions pointed to the softer approach of Juvenile Justice System to serious offences. It has been found that the youngsters can be as brutal as the adults, which forced the people to reanalyze the definition and approach to juvenile delinquents in India. Due to access to internet, the psychiatrists feel that aspirations of adolescents and adults.

The juvenile justice (care and protection of children) act, 2015
The parliament enacted juvenile justice (care and protection of children) act 2015(2of 2016), which received the assent of the president of India on 31st December,2015. Section 3 of the act enumerates the principles that are to be followed in the administration of the act among them are: The J.J act recognizes two categories of juveniles namely 1. Juveniles in conflict with law 2. Juveniles in need of care and protection. A child, who is alleged to have committed an offence, and has not completed18years of the age on the date of an commission of an offence is defined juvenile in conflict with law. Section 2(d) describes the juveniles who need care and protection.

The main cause of juvenile delinquency are:

The industrial development and economic growth in India has resulted into urbanisation which in turn has given rise to new problem such as housing, slum dwelling, overcrowding, lack of parental control.

Poverty is another potential cause of juvenile delinquency. Failure of parents to provide necessities of life such as food and clothing etc. At times, even the parents conspire at this for the sake of petty monetary gains.

Biological factors such as early physiological maturity or low intelligence, also account for delinquency behaviour among juveniles. The hormonal changes in the body of the juveniles are responsible for their impulsive and rebellious behaviour. Special care should be taken to ensure effective protection to girls against prostitution and child pornography.

Interdisciplinary studies on juvenile delinquency reveal that across the world, many behavioural changes occur in the juveniles/ adolescents, which are related to the sudden changes in their body due hormonal surge, associated with puberty. The changes are most apparent in physical parameters, such as change in height and weight of the adolescents, and are soon followed by other sexual and physical changes of maturity. These physical changes are accompanied by mental changes also.

Social factors such as poverty and low education are also responsible for juvenile delinquency. Habits of substance abuse also make the youth vulnerable to offending. Broken families are directly related to higher rates of delinquency. These indicates that the juvenile who receive less familial supervision, or who live in dysfunctional family settings or in disadvantaged families have more chances of getting involved in delinquent behaviour.

It set age limits on criminal responsibility and excluded children younger than 7 from culpability. The children between 7 and 12 years of age were considered to have sufficient maturity to understand the nature of their actions under certain circumstances.

Social Media – Films and pornographic literature have also added to the magnitude of delinquency. Cinema and obscene literature may often provoke sexual and other impulses in adolescence. Hence, they may start their ‘adventure’ in satisfying them in the process of which they commit crimes.

Similarly, a number of studies have shown that children in the juvenile justice system experience substantially higher rates of mental health and substance abuse disorders than youth in the general population.12-16

In considering violence by youths, Rossow et al.24 and Bernburg and Thorlindsson25 show that when violence is measured as a specific act, such as beating or threatening to beat someone or having been in a fight with a weapon, frequent intoxication will lead to increased violence, as will the use of marijuana or other drugs. Salts et al.26 find that alcohol and marijuana use are highly correlated with increased violent behaviors in both black and white adolescent males. Similar findings hold for teens of both genders when examining drug use and violence in school.27.

In the case of juvenile offenders, FIR and charge sheet are filed only in serious cases, where the punishment for the offence exceeds seven years.

A juvenile in conflict with the law is not arrested but apprehended only when allegation is for serious crime.

One apprehended the police must immediately place such juvenile under the care of welfare officer who produces him/her before the juvenile justice board. Thus, police does not retain pre-trail custody over the juvenile. 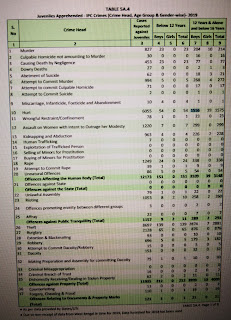 According to The National Crime Records Bureau (NCRB) 2019 data indicates that there has been an increase in crimes committed by juveniles, especially by those in the above 12 and 18 below years’ age group. Highest offences committed by juvenile for affecting human body is 12173 total registered. In the age of 12years above and 18years below in both male and female is 3148. Offences registered against the state is zero.

Observation home:
The juvenile who need only a short term custody during inquiry or trial are kept in an observation home. This institution is also used for the custody of under trial children and juvenile in conflict with law about whom inquiry is pending or who are awaiting trail or removal to an appropriate home or borstal.

There are children’s homes for the treatment of neglected children for whom a short term regulatory protective care is necessary but a long term residential training is not necessary.

The J.J act,2000 also provides for setting up correction home for custody of delinquent juveniles. Basic amenities such as accommodation medical care, education, and vocational training are available to delinquent juvenile in these homes.

Homes are actually crime nurseries for the juveniles in conflict with the law because of the mismanagement and lack of clear vision as also infrastructure.

Effects and societal reaction:
Young people who commit serious crimes before they are 18 years old challenge the future for everyone involved. They may be acting out to protest perceived abuses that have been perpetrated against them. They may believe that there is no future for them outside of a life of crime.

They may be expressing anger or frustration directed against another person or group or looking for approval from a gang. Whatever the motive, juvenile delinquency affects too many families, and communities. It is a serious problem that challenges the efforts of government agencies, politicians, educators, faith communities, and nonprofit organizations alike.

The juvenile who commits a crime also suffers effects that he or she is probably unable to predict. He or she may lose his or her freedom while being incarcerated or placed on probation. The juvenile may lose ground academically as well. Although placement in residential detention centers for juveniles may be appropriate consequences for the adolescent's criminal actions, it also puts him or her in relationships with other delinquents, who may be more sophisticated or influential.

This makes recidivism likely and, in many states, when a juvenile older than 14 becomes a repeat offender, he or she can be tried and sentenced as an adult. The delinquency may even have future consequences on the adolescent's college and career choices.

The upheaval and trauma of having a family member who is a juvenile delinquent can create instability for the other relatives. Not only does the family have to cope with the needs of the child who is in trouble, but they may also have to raise large amounts of money to pay for lawyers. In addition, the family has to face the ethical issues of responsibility to the victims of the child's crime. Families must usually attend group counseling sessions, which can be disruptive and costly during the time when the child is in detention or on probation.

Conclusion
The rehabilitative model embodied in the Juvenile Justice and Delinquency Prevention Act of 1974, focusing on the needs of the young offender, has lost ever more ground over the past 20 years to punitive models that focus mainly on the offense committed. Government policy on juvenile delinquency must often struggle with the appropriate balance of concern over the healthy development of children and adolescents who violate the law and a public desire to punish criminals.

This tension between rehabilitation and punishment when dealing with children and adolescents who commit crimes results in an ambivalent orientation toward young offenders. Criminal acts must be suppressed, condemned, and punished. Children and adolescents who commit criminal acts must be educated and supported in a growth process that should be the objective of government policy for all young people, including young offenders.

Adolescence is a period of dating, driving, and expanding social networks—all choices that can produce positive or negative consequences for the adolescent and the community. Public policies in the areas of education, medical care, alcoholic beverage control, and juvenile crime reflect beliefs that adolescents have not acquired the abilities or capacities necessary for adult status. Creating the appropriate public policy for a period of semiautonomy is no small task (Zimring, 1982).