Hierarchy of Criminal Courts and their Jurisdiction 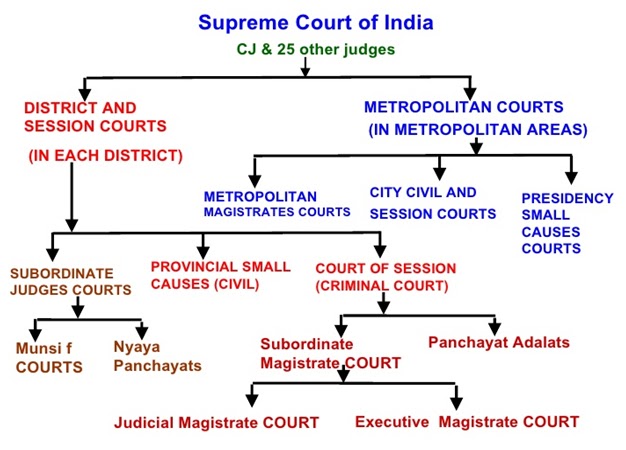 The Supreme Court has original, appellate and advisory jurisdiction. Its exclusive original jurisdiction extends to any dispute between the Government of India and one or more States or between the Government of India and any State or States on one side and one or more States on the other or between two or more States, if and insofar as the dispute involves any question (whether of law or of fact) on which the existence or extent of a legal right depends. In addition, Article 32 of the Constitution gives an extensive original jurisdiction to the Supreme Court in regard to enforcement of Fundamental Rights. It is empowered to issue directions, orders or writs, including writs in the nature of habeas corpus, mandamus, prohibition, quo-warranto and certiorari to enforce them.

The appellate jurisdiction of the Supreme Court can be invoked by a certificate granted by the High Court concerned under Article 132(1), 133(1) or 134 of the Constitution in respect of any judgment, decree or final order of a High Court in both civil and criminal cases, involving substantial questions of law as to the interpretation of the Constitution.

Appeals also lie to the Supreme Court in civil matters if the High Court concerned certifies:

In criminal cases, an appeal lies to the Supreme Court if the High Court:

The procedure for appointing Judges is the same except that the Chief Justice of the High Court concerned is also consulted. They hold office until the age of 62 years and are removable in the same manner as a Judge of the Supreme Court. To be eligible for appointment as a Judge one must be a citizen of India and have held a judicial office in India for ten years or must have practised as an Advocate of a High Court or two or more such Courts in succession for a similar period.

Each High Court has power to issue to any person within its jurisdiction directions, orders, or writs including writs which are in the nature of habeas corpus, mandamus, prohibition, quo warranto and certiorari for enforcement of Fundamental Rights and for any other purpose.

This power may also be exercised by any High Court exercising jurisdiction in relation to territories within which the cause of action, wholly or in part, arises for exercise of such power, notwithstanding that the seat of such Government or authority or residence of such person is not within those territories.

Each High Court has powers of superintendence over all Courts within its jurisdiction. It can call for returns from such Courts, make general rules and prescribe forms to regulate their practice and proceedings and determine the manner and form in which book entries and accounts shall be kept.

Constitution Of Criminal Courts And Their Territorial Jurisdiction:

The criminal courts are constituted according to the Criminal Procedure Code (Cr.P.C) 1973.

Section 6 of the Cr.P.C. provides that Besides the High Courts and the Courts constituted under any law, other than this Code, there shall be, in every State, the following classes of Criminal Courts, namely:

Power Of Courts To Try Offences:

Power Of The Court To Pass Sentences:

Sentences which may be passed by the courts have been mentioned under section 28 and 29 of criminal procedure code. Conclusion:
The hierarchy of the Courts has been developed in such a manner that it becomes easy for everyone who is living in this country to knock the doors of the courts whenever a dispute arises. It provides a platform for the citizens for appealing to higher courts, in case they feel that justice has been denied to them by the lower courts. India is a country with a huge population in it. Therefore, it needs this existing system of Judiciary to prosper and makes its process easier, so that people can approach it easily so that Justice is given to all citizens of this country.