Procedure For Trial For Offence Of Hunting Wild Animals

By Arunima Shrivastava | Views 27644
The relation between man & nature is well described by William Wordsworth in his poem Written in Early Spring when he wrote, to her fair works did Nature link, the human soul that through me ran

At Present, Man is demolishing nature, Environment and Wildlife. We all know that wildlife and wild animals are an essential part of nature. Growth of industries, urbanization, Technological excellence, and economical gains had led to the depletion of natural resources, irreversibly. This is mainly because of a lack of concern lack of public awareness and foresightedness, and indifferent attitude towards the grave consequence of the destruction of wildlife. Large scale killing of wildlife and loss of vegetal cover has resulted in a decline of environmental quality.

The word Wildlife means the native wild fauna and flora of a region. According to Section 2(37) of the Wild Life (Protection) Act, 1972, “wildlife” includes any animal, aquatic or land vegetation which forms part of any habitat.

Wildlife crime can be defined as taking, trade, processing, movement, possession, or consumption of wild animals and plants or their derivatives in infringement of any international, national or regional legislation. Administrating cruelty to a wild animal and the victimization of wild animals, both free-living and captive creatures adjoin this definition. As illegal wildlife trade is also known as a serious economic offense because it involves immense amounts of money, Hunting and illegal trade are known as a major wildlife offense. All other offenses come under ancillary offenses like preparation, possession, transportation, processing, etc 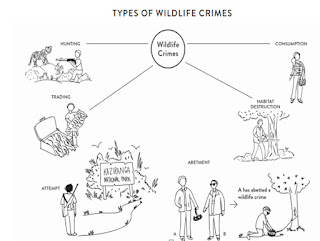 Wildlife had been affected by various persons who are involving as:

Need for Protection of Wildlife

The Wildlife Act 1972 provides protection of birds, plants, wild animals and aquatic animals guaranteed the ecological and environmental protection of the country.

The Acts which have an important bearing on wildlife enforcement in India include: 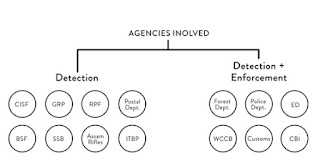 Establishment of the Wildlife Crime Control Bureau:
A Wildlife Crime Control Bureau (WCCB) has been set up by the Ministry. Under the provisions of Environment and Forests, Government of India, Chapter IV-C as amended in 2006, sections 38Y and Z of the Wildlife (Protection) Act, 1972. It is being seen as a major opportunity to address the issues of illicit trade in wildlife India. 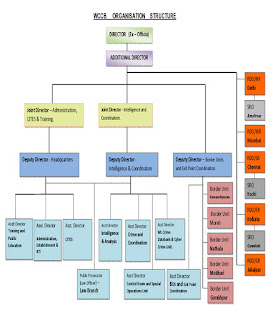 Who can go to Court?

As per the provisions of Sec. 55 of the WLPA1972, the following persons can file a complaint under this act:
Procedure
Collection of Intelligence
Intelligence information is collected to forecast, analyze, and publicize, prevent, or monitor criminal activities. From sporadic incidents of poaching (mainly for meat), wildlife crimes have now increased to organized criminal activities with international criminality. The collection of intelligence about such organized criminal networks, and their activities, and the aggregation of such information on a real-time basis require time to effectively deal with wildlife crimes

In wildlife offenses, the investigation can begin with an arrest/seizure by an authorized officer, recording a threat/crime report or seizure. In various states the report is known by various names like seizure intensity preliminary report (POR), crime report, first information report (FIR), H-2 case, etc.

The first report submitted to a judicial court in wildlife crime cases can be called the Wildlife Crime Report (WLOR). Wildlife crime report should be prepared under section 50 (4) of the Wildlife (Protection) Act, 1972.

Search and Seizure
Search and seizure should be done as per the provisions of Section 50 of the Wildlife (Protection) Act, 1972. Although the Wildlife (Protection) Act, 1972 gives the authorized officer the power to enter, search, arrest, and detention but the procedure prescribed under section 100 of the Code of Criminal Procedure (Cr.PC), such as discovery in the presence of two independent witnesses. To conduct, prepare a list of things seized during the search, conduct search of female occupants using female officers, handover of the seer of the overwritten search list, etc., must be strictly followed.

Arrest
The arrest of the accused is an integral part of the investigation into wildlife crimes. Forest officers and police officers, not below the rank of sub-inspector, are the most vulnerable and detained inspector under sections 50 (1) (c) and 50 (3) of Wildlife (Protection) Act 1972. 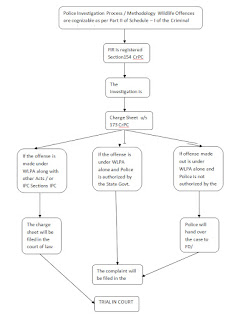 Who can investigate a wildlife offense?
Wildlife Protection Act 1972, under Sec 50, (8) provides for special powers that are not below the rank of Asstt. Director of Wildlife Preservation and Asstt. Conservator of Forests For an investigation of offenses under this Act. It just means that the concerned authorities have additional powers for investigation and It is not that they are the only officers to conduct such an investigation.

The Hon. Supreme Court of India, in CBI v/s Motilal (2001) has held that the Police and the CBI can also investigate wildlife offenses.

The post of the sub-forest guardian for confessing from any person against whom a reasonable suspicion exists that he has committed an offense against the act, by paying the amount of money by way of compounding of the offense to such person Is suspected The sum of money accepted or accepted as composition shall not, in any case, exceed twenty-five thousand rupees. Upon payment of such funds to the authorized officer, the suspect, if in custody, will be discharged and no further proceedings will be taken against him in connection with the offense.

Prosecution of Cases in Courts

Under Section 55 of the Wildlife (Protection) Act, 1972, cases are filed in accordance with the provisions of sections 244 to 248 of the Code of Criminal Procedure.

Each court should have a forest officer to follow the prosecution in the cases under trial, execution of procedures, ensuring the presence of witnesses and briefing them before evidence, in progress through an immediate superior to judicial ACF / DCF Should present daily court diary. Hearing of cases listed in court on that day, the presence and performance of prosecution witnesses and public prosecutors, the next date of hearing, and any other observation of their relevance during the trial proceedings.

Supervisory officers are required to personally supervise the investigation and travel to the crime scene as far as possible. DFO / DCF should keep a running notebook of reported wildlife offenses under their jurisdiction, wherein they should file a summary of the WL OR and the main points of subsequent investigations on a regular basis.

When a final order is made by the trial court in a wildlife crime case, a copy of the judgment should be obtained and analyzed by the concerned DCF / ACF and sent to the next higher formats with his comments and sentencing. In this case, there should be sufficient punishment. Given. In the case of acquittal, DCF will have to comment and send it to the legal cell if there is scope for appeal.

Offence made under Article 14, 19 (1) (g) & 19 (1) 6 of COI, Sections 39,4,49-C, of WPA Total prohibition on trade in ivory under the WPA held to be reasonable. Trade that are dangerous to the ecology may be regulated or totally prohibited and therefore regulation includes prohibition. Traders are a class by themselves. In absence of such criminal trial and offence having been found committed, Section 39 may not have any application. In that view of the matter it is evident that the properties do not stand vested in the Government in terms there for. The purport and object of the Act must be given its full effect

State of M.P.vs. Madhukar Rao, JT 2008 (1) SC364 Supreme Court
Offence made under Section 39 Any attempt to operationalize Section 39(1)(d) of the Act merely on the basis of seizure and accusation/allegations levelled by the departmental authorities would bring it into conflict with the constitutional provisions and would render it unconstitutional and invalid.

Sansar Chand vs. State of Rajasthan (2010) 10 SCC 604 - Supreme Court
Offence made under Articles 21, 48-A and 51-A(g) of the Constitution of India, Sections 9,49-,50 and 51 of the WPA Ecological chain and balance - Importance of wildlife conservation for the society. Directions issued by Supreme Court to Central and State Governments and their agencies to make efforts to preserve India's Wildlife and take stringent action against those violating provisions of Wildlife(Protection) Act. Extra-judicial confession in this case was corroborated by other material on record. Hence, conviction is sustained

Shashi Singh vs. State of Haryana,2006 (3) RCR (Criminal) 624 - High Court of Punjab & Haryana
Offence made under Sections 9,39,50 ,57 of WPA Taking the life of a defenceless animal, on the verge of extinction, hunting of which is specifically prohibited by Section 9 read with Schedule I of the Act, committed by the petitioners, so grave and heinous as to dissuade extending the anticipatory bail to them

Conclusion
The judiciary plays an active role in giving decisions in favor of wildlife preservation. Now the courts are also participating in wildlife protection by giving appropriate sentencing and deterrent sentencing in wildlife crimes. Most importantly let us all resolve that we should end the relative neglect of wildlife conservation in recent years. Wildlife conservation is too important a task to be treated lightly or ritualistically.

Analysis of The Mediation B...

Should The Marriage Age For...